“Hellenic Fishfarming S.A.” specialises in the production of market fish such as sea bass and gilthead sea bream. These are fully grown fish, weighing between 300-600 g.

The production procedure of market fish depends on the species and the weight of fish and varies according to the season and the climatic conditions of the area, where each production unit is located.

Production is completed at the market fish feeding units. The larvae intended for fattening are placed in the floating cages and nets at the marine installations integrated in each unit. After 14 to 18 months, the larvae are grown into fully grown fish of each species, and comprise the final product. 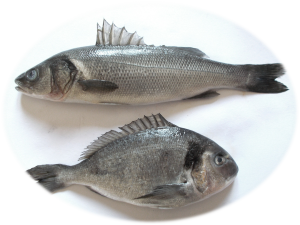 The rearing procedure begins with the placement of the juveniles, weighting 1.5 – 2 gr. in specially modified fish cages and their systematic feeding. Fish food used depends on the fish species, its size and the breeding season. The fish is fed by specialised personnel or by automated feeding machines, depending on the unit’s capabilities.

During the production of market fish the following processes take place:

Classification – spacing – counting
In each unit, specialised ichthyologists are in charge of classifying the fish in two to three different sizes and putting them in the cages in proper densities, according to its species and weight, so as to guarantee the best possible conditions for the growth of the fish populations. In addition to classifying and spacing, the fish is also counted in order for each farmto keep record of their fish production capacity and the fish’s steady growth.

Net inspection and replacement
Specially trained divers are carrying out underwater inspections for the condition of the nets holding fish populations and replace them in case of damage. This course of action is necessary in each farmin order to ensure that the breeding species are kept safe inside the nets, in excellent physical shape and under the best conditions at all stages.

Harvesting
Harvesting is one of the most important activities of a fattening unit, given that it is the final stage of production before delivering the market fish to the market. The fish is considered ready for harvesting when its weight exceeds 350 gr. However, fish may be harvested at smaller sizes depending on market demand. During this stage the final qualitative control and counting of the final product takes place.
The market fish production and trading is operational all year long.

Final products
The range of market fish marketed by ‘Hellenic Fishfarming’ is as follows: